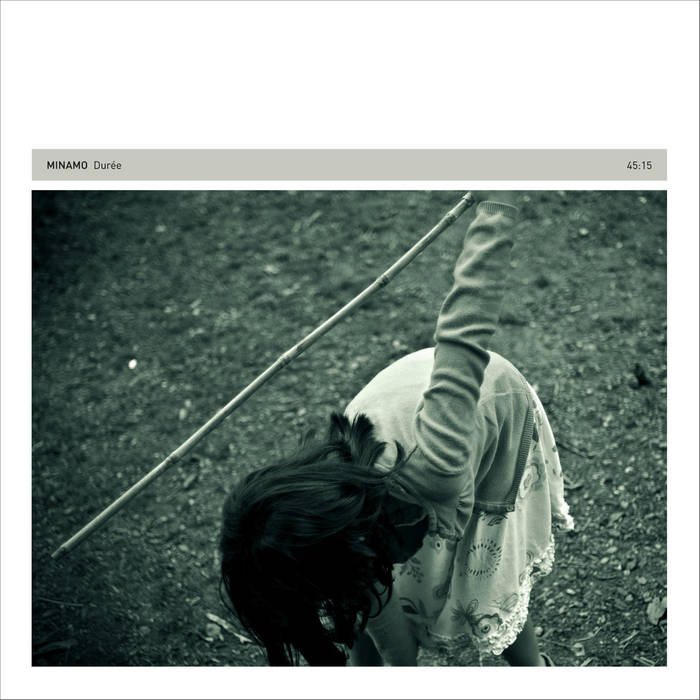 Back in 1999, on the forefront of the Japanese electronic/acoustic microsound scene, was the then two-piece live improvisation band Minamo (two more members were added in 2001 to make the current four-piece lineup). Their live concerts helped pioneer this hybrid of delicate and natural instrumentation with microscopic electronics and subtle digital processing bringing an organic richness to a genre that threatened to remain coldly digital. Fans of Minamo not lucky enough to see them create their music live have enjoyed their studio albums and collaborative releases which captured these performances and processed them into hypnotic drones and electro-acoustic soundscapes.

Durée, their last studio work since 2007’s collaboration with Tape, and their follow-up to Shining on 12k (12k1031, now out of print), takes influence from the French philosopher Henri-Louis Bergson’s concept of “pure durée,” an idea that one’s consciousness is a constant flow and not something that can be divided, reversed, or measured. Minamo used these ideas in creating their music, despite the contradiction of the time-stamped CD format, to try to subvert the ideas of compartmentalized “time” and “space.” With a strong sense of non-linearity and flow taken from Bergson’s ideas, Minamo have created a colorful, skittering wash of music, noise, and texture that embraces a sense of out-there-ness.

Minamo are Yuichiro Iwashita (acoustic guitar, percussion), Namiko Sasamoto (keyboards, saxophone, percussion), Keiichi Sugimoto (electric guitar, computer, nintendo, bells, recording/mixing) and Tetsuro Yasunaga (percussion, harmonium, analog synthesizer, pedals, small instruments). Like all of their music, Durée was recording during long, live, improvisational sessions and later finessed and mixed in the studio for release. Their process this time around, however, was much more analog than before. While they have always incorporated guitars, computers and synthesizers into their work, Durée captured performances created with an abundance of acoustic and percussion instruments and analog synths, keeping digital effects to a minimum and preferring the dirty sound of guitar pedals. The process this time around came easier due to the natural musical communication built between the members over the past 10 years. Durée simply finds more playing and interaction than editing and programming as compared to previous releases and, according to Sugimoto, is finally the mark where Minamo wants to be, and a template for work to come.

Durée, which will be released worldwide on January 12th, 2010, has the distinction of launching the new design of the 12k digipack which subtly updates the austere white package to a more unified and understated play between simple type and photography.

In 1999, the electro-acoustic group Minamo was formed by Keiichi Sugimoto and Tetsuro Yasunaga.
In 2000, minamo’s self-released CD-R “wakka” was reissued by the New York label Quakebasket.
This release was selected by Matmos as one of best sounds in 2001 in The Wire magazine. In 2001 two new members joined, Yuiichiro Iwashita (guitar) and Namiko Sasamoto (sax, organ), to make the band a quartet. ... more

Bandcamp Daily  your guide to the world of Bandcamp